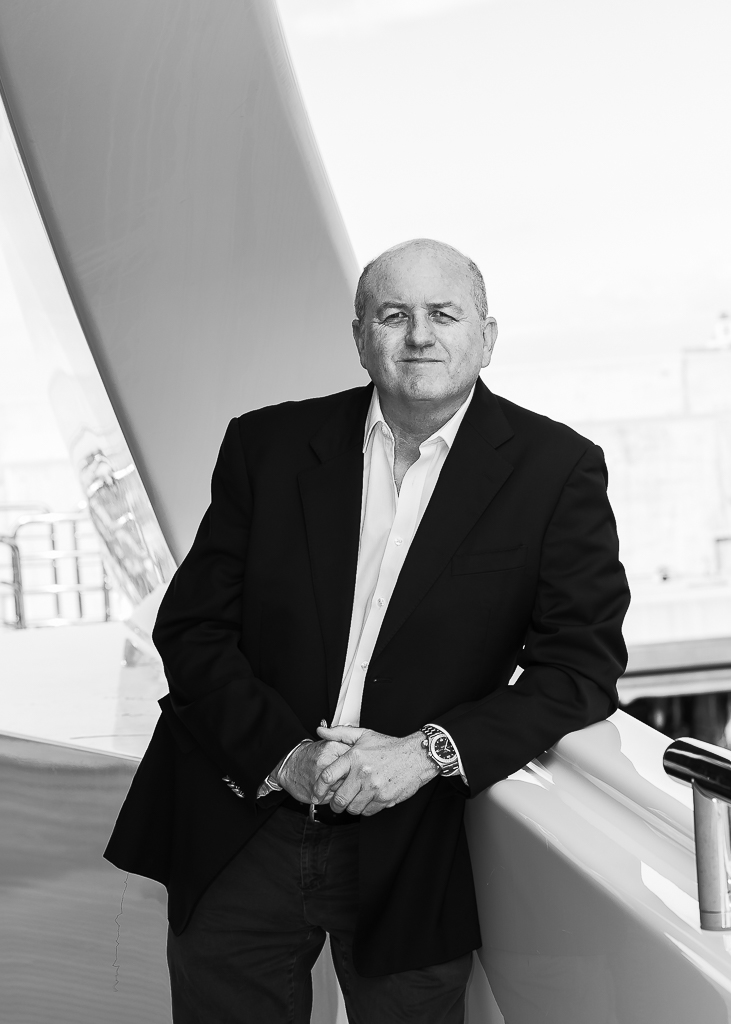 Jonathan’s nautical career began in Mallorca in the 1970’s when superyachts were as rare as hen’s teeth. In his teens, he sold second-hand windsurfers, speedboats and even pedalos for a beach, already demonstrating a flair for building relationships and earning lasting trust.

Having completed his A Levels and Scottish Highers in Glasgow, where he was reluctant to go as it dragged him away from giving windsurfing lessons to the inner circle of the Spanish Royal Family, Jonathan was head-hunted by Camper & Nicholsons International and was persuaded to close down his first company, Comercial Náutica, joining them as a yacht sales broker in 1985. It was the start of a decades-long career that would culminate in him being responsible for directing the Camper & Nicholsons Spanish operation for over twenty years.

Something that all of Jonathan’s clients have in common is that not one of them has ever complained that they bought the wrong yacht. Indeed, he has an exceptional talent for bringing owners and buyers together in such a way that everyone walks away as happy as possible.

Naturally, the bureaucracy and legal considerations that come hand-in-hand with a yacht purchase are not without their pitfalls and are seldom fun. While Jonathan cannot make these vanish, he can smooth the waters with his profound knowledge, excellent contacts, warm disposition and natural ability to deal seamlessly in both of his first languages, English and Spanish.

Unafraid to admit that a lifetime dedicated only to yacht brokerage would have lacked a certain sparkle, Jonathan has a comprehensive CV of extra-curricular interests ranging from being one of the main organisers of the Almirante Conde de Barcelona regatta for vintage and classic yachts and supervising the restoration of the fabulous 1907 15 metre Int. HISPANIA built for King Alfonso XIII and campaigning for several years the 57 foot Sparkman & Stephens cutter GIRALDILLA which belonged to Don Juan de Borbón, to co-founding classic, sport and unique car and motorcycle club Driving Mallorca, now Gentlemen Driving. Jonathan is a co-owner of Maritimo Yachts and was also central to the creation of the Spanish Large Yacht Association (AEGY), credited with such victories as the matriculation tax exemption for charter yachts over 15 metres and later helping to create the Balearic Yacht Brokers Association (BYBA), who are greatly responsible for the relaunch and rampant success of a new-format Palma Superyacht Show.

Jonathan has extensive experience in sailing dinghy and windsurfing racing, cruising, classic and vintage yacht regattas, has owned and co-owned boats for many years, enjoys SCUBA diving, driving and motorcycling, and is a qualified microlight, fixed wing and helicopter pilot.

In July 2022, Hamilton Marine successfully leaped across the Atlantic and landed safely in the capital of US yachting, Fort Lauderdale, thus becoming HAMILTON MARINE INTERNATIONAL under the captaincy of David Ross as CEO of our emerging US Division.

“Having a yacht is a reason for being more cheerful than most.”
Kurt Vonnegut